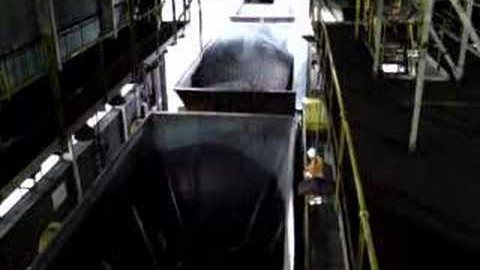 Ever wonder where these coal trains end up?

Well, here is an example of a power plant receiving coal hoppers on a non-stop basis!

These trains both load and unload their cargoes without ever stopping! The locomotives are specially designed to allow a very low steady speed for loading and unloading using an electronic speed control known as Slow Speed Control. Hence the name “Merry-Go-Round” is given.

Open hopper cars can be unloaded from the bottom as seen here or from the top by actually rotating them over on specially designed equipment that holds the car to track while disconnecting from the car in front and back.

This type of efficiency is needed by coal fired power plants that can consume up to 5,000,000 tons of coal annually. At 33 tons per hopper car, that would equal over 150,000 hopper cars per year or about 400 per day to load and unload!

Let us know if you work at power plant or have seen this type of equipment in action! We would love to hear your comments!