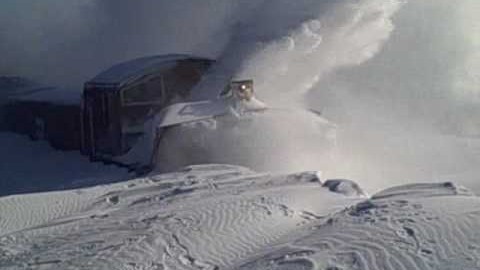 Designed for deeper drifts, this war wagon has all it can handle!

Rotary plows are designed for use when wedge snowplows are not feasible to use because of snow depth. In this case, it is easy to see why this rotary was called upon.

Note how deep the drifts are by the men standing on top of the plow’s path.

Conceived by a Toronto dentist back in 1869, the rotary plow has really not changed much over the years.

These plows can have up to 11 foot fan blades which can generate centrifugal force to throw the snow 150 yards!


Considered the Big Guns or War Wagons of snow fighting, the wheel at the front spins approximately at approximately 60-90 RPM and captures snow is a series of scoops.

These 16 foot high A-units can plow snow banks as high as 12 feet! The rotary unit can move around 4-8 mph, acting as a giant auger chewing into snow banks.

Let us know if you have seen one of these war wagons working in action. We would love to know about your experience in the comments section!