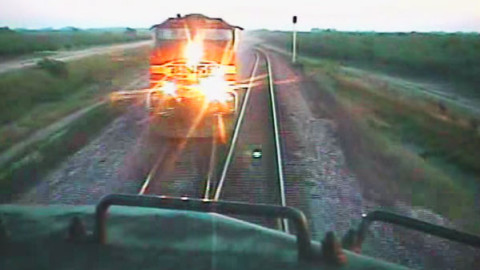 While going too fast to jump, engineer tells conductor “Lets ride it out, we don’t have time”!

In the early morning dawn of June 14, 2006, two Burlington Northern freight trains traveling in opposite directions narrowly missed hitting each other head on at the Kismet siding on the outskirts of Kismet, California.

Being a sleepy farming town, residents were shaken out of their beds by the sound of the metal crunching impact!


It was later determined by the Federal Railroad Administration investigating the accident that the BNSF #4059 train (seen through the cab window) was the probable cause for missing a interlocking signal displaying a stop indication.

If you look closely, you can see the engineer of BNSF #4059 jump out of the cab shortly before impact!

Realizing that he was moving too fast to jump, the engineer of the northbound BNSF #4479 (cab video) looked over and yelled at his conductor “Let’s ride it out, we don’t have time!”

Amazingly there were no life threatening injuries as a result of this collision!

We are happy to see that the crew made it out alive and hope that technology can prevent any further accidents like this! Please let us know your thoughts!