Cold Start For This British Locomotive! 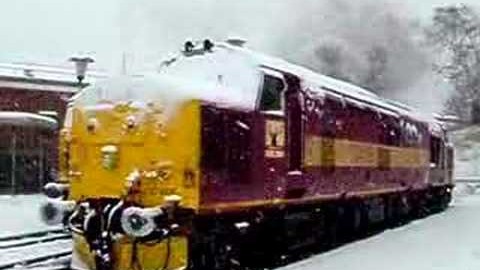 British Rail Class 37419 really wants to go back into the shed on this cold morning!

Who can blame her? Filmed at Old Oak Common Depot in London, UK., this Class 37 locomotive sounds like she is in dire need of an overhaul.

The are known as “Tractors” to railfans because they sound like a agricultural tractor diesel engine when starting!

In this clip, the power unit is cold and is struggling until the cylinder gets heated from continued churning of the starter. Pre-heaters were not common among this class of locomotive.

They British Class 37’s saw service in Wales and Northern Scotland where the winters are quite frigid.

Let us know your comments about this type of British Locomotive. We would love to hear from you!