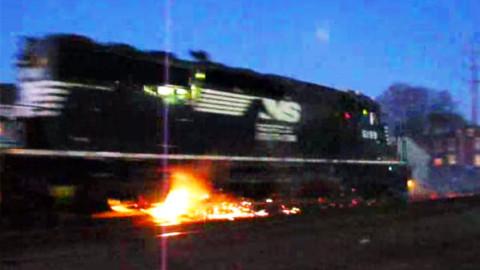 In a rare lash up of locomotives only, sparks fly when there is a malfunction with engine number 6!


With only six locomotives, this fast moving locomotive convoy has a problem when the traction motor fails and the roller bearing seizes with the last locomotive. If is unknown if the engineer is aware of what is happening or whether the train defector warning somehow missed the problem.

Looking like a rolling fireworks show, the traction motor is used for the propulsion of the locomotive. It is a series-wound brushed DC motor usually running on 600 volts. This ultimately provides the torque needed to propel the locomotive.

When the internal elements wear out, you can have a fire from the friction as seen in this clip. The sparks are most likely caused by the windings disintegrating as the train is moving.

The Norfolk Southern locomotive on fire is an EMD SD-40 that:

Let us know if you have seen anything like this one! We would love to hear your comments!