Staged Collision Shows How Long It Takes A Train To Stop! 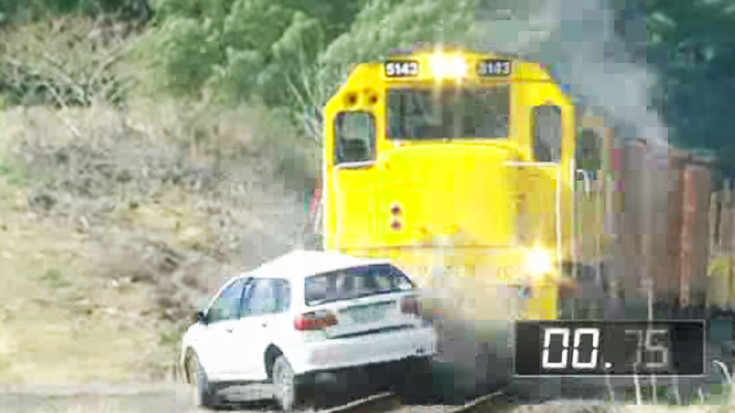 Just another reason to not drive onto the tracks when trains are near!

In an attempt to teach us more about rail safety, the kind folks over at KiwiRail Holdings Limited, New Zealand’s state owned rail company, using engine #5143, have put together a controlled train collision! Hoping to inform us all on the risks of driving onto the tracks while an oncoming train is approaching, this video aims to show just how long it takes for an engine to stop moving at a fairly reasonable speed.

The video shows a car attempting to maneuver past a railroad crossing and then stall, something that has caused quite a few similar accidents. After attempting to alert the driver via horn to get off the tracks (as the car is literally about to be rammed into by a freight train), the engineer pulls the breaks attempting to stop the train!

Even at a slower speed the locomotive makes waste of the tiny car!

This however is not as simple as stopping a car. These trains can often be miles long, weigh tens of thousands of tons, and travel speeds much higher than the assumed 30mph this freight engine is going! Engine #5143 stopping before slamming into the car is nowhere near the realm of possibility!

How long do you think it would take a train going the maximum allowed speed with a full load to stop? Give us your thoughts, we’d love to hear them!