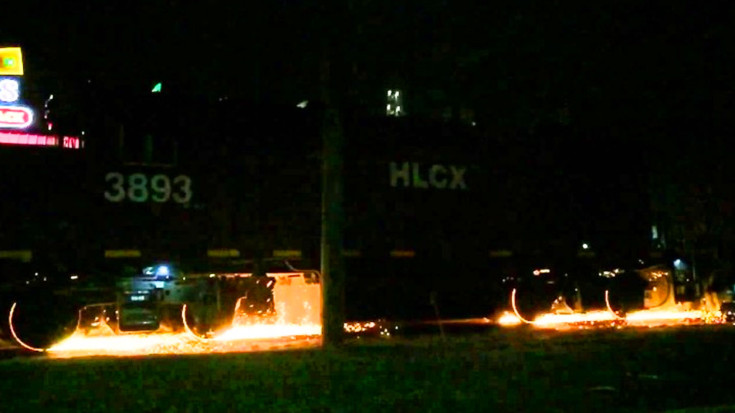 Night time is the right time to see the effects of wheel slip on locomotive traction!

Wheel slip is a problem in railroading and different locomotives handle it in separate ways, depending on how efficiently the power gets to the driving wheels. The clip captures the show in slow motion as the locomotive tries to gain traction while using the sand shoots in front of the wheels. Sparks end up flying everywhere!

Wheel slip has been a problem occurrence since engines first took to the rails!

The traction motors have to feathered just right to exert a minimum amount of power to the rails in order to gain the correct weight to rail interaction for traction.

In this short clip, you can see the wheels grinding away at the rails while trying to get a grip. If the engineer does not get his power ratio right by applying the proper speed in relation to the weight, he could easily start liquefying the steel rails!


Steel on steel with a heavy weight such as an engine creates what is called tractive effort or adhesion.

Engineers can handle wheel slip by reducing speed to allow the traction to take hold or the can apply sand from special containers mounted in front of the driving wheels to gain traction, especially in bad weather conditions where the track is wet or slippery.

Let us know if you have seen a slip like this or have been on a train that experienced some kind of wheel slippage! We would love to hear your comments!