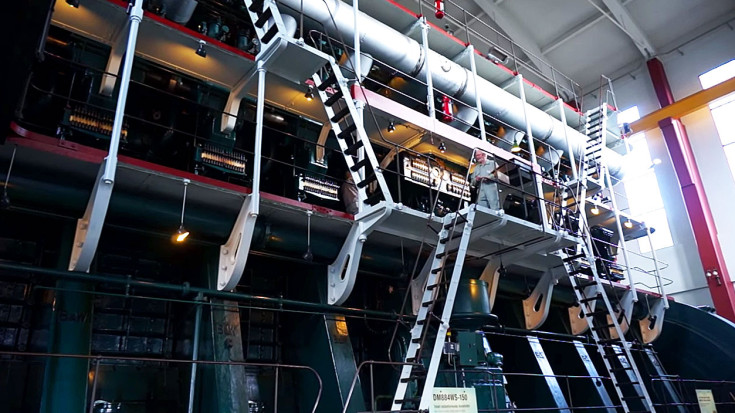 Located at Diesel House museum in Copenhagen, Denmark, this engine built in 1932 remains operational and on standby if needed.

She is still the largest diesel engine in the world!

Used mainly as a tourist attraction today, it is fired up the first and third Sunday every month for about 5 to 10 minutes at a time. The engineers take meticulous care of the this behemoth machine down to the last nut and bolt!

The 83 year old engine is still very much operational and was on standby for the city of Cophenhagen until 2004. Now it is mainly a tourist attraction.

During World War II, the Danish resistance used to hide weapons from the enemy in and around the engine so they would not be found!

Although this engine still holds the record for size, she is not the most powerful diesel engine ever built. That distinction goes to the Finnish firm Wartsila, which has just completed a marine diesel engine to power the largest tanker ships in the world. The Wärtsilä14RT-flex96C is a 14 cylinder diesel engine which can generate a whopping 107,389 horse power!

Let us know if you have ever had the chance to see the DM 884WS-150 in the flesh! We would love to hear your comments!