Display Of How A Steam Engine Works 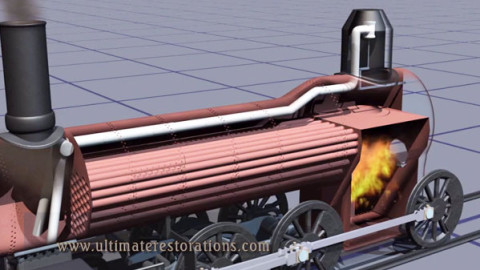 Pretty basic stuff except that a lot of folks do not know what really goes on inside the locomotive.
The equation goes something like this:

As this video illustrates, a lot of fuel is needed to keep the fire box hot so the heat and smoke can run through pipes(flues) to boil the water on the outside of the boiler. The boiled water turns into steam. The steam created rises to the top of the engine and is captured in the “steam dome” on top of the engine. Variations of these steam locomotives run on coal, wood and oil as fuel sources.

Once the engineer releases the steam in the “dome” it travels along the pipe down to the slide valves at the front of the engine. There is so much pressure (appx 300 PSI) created by the steam, that it is able to move the pistons in each valve forward and back which turns the wheels by way of the connecting rods.

Chug, chug, Chug is the sound of the steam escaping after each slide of the valve. Maybe this is why we are all so addicted to the steam engines!

If you have operated a steam engine before, we’d love to hear about your experience!