Window To The Past: The Zig Zag Railway Steamers! 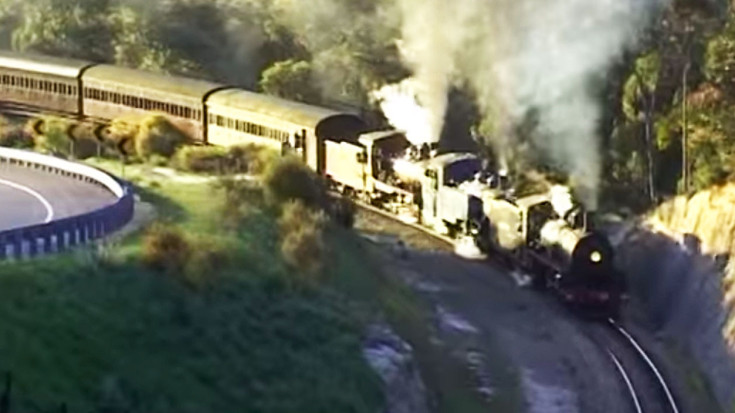 For Australian railfans, there once was a place where they could see steam engines do what steam engines do best on nearly an every day basis. This wondrous place was the Zig Zag Railways of New South Wales, Australia. Initially in operation from 1869-1810 it was reopened as a heritage railway in October of 1975.

You can see various steam engines here, including a triple header!

As the world saw the steam engine era come to an end, Ian Thornton– a steam enthusiast, leading a group of like minded individuals sought to create an operating steam museum. Between 1967 and 1974 a site was chosen (The Lithgow Zig Zag), negotiations successfully commenced between the Zig Zag trust and local government, and the Lithgow Switchback Railway Co-op Limited was born (later known as the Zig Zag Railway Co-operative Limited).

The engines pass viaducts that are around 150 years old!

The Zig Zag Railways had the unique distinction of being the only heritage railway in Australia to run every day of the year but Christmas! Unfortunately this living steam museum was not destined to last forever, and in June of 2012 the railway was closed following accreditation issues with the New South Wales Government. Plans to reinstate the the railway in 2013 were left shattered when the 2013 New South Wales bushfires struck causing an incredible amount of damage.

The local bushfire known as the ‘State Mine Fire’ caused millions of dollars in damage including but not limited to: original rail way equipment circa the 1920’s as well as ten passenger carriages!

Plans to get the rail road running by 2015 have surfaced, though nothing is set in stone. Lets hope for the best, and until then, lets enjoy what recorded footage we have of this magnificent exhibit!

Were you able to visit/ride the Zig Zag Railways before it closed? Please tell us about it!