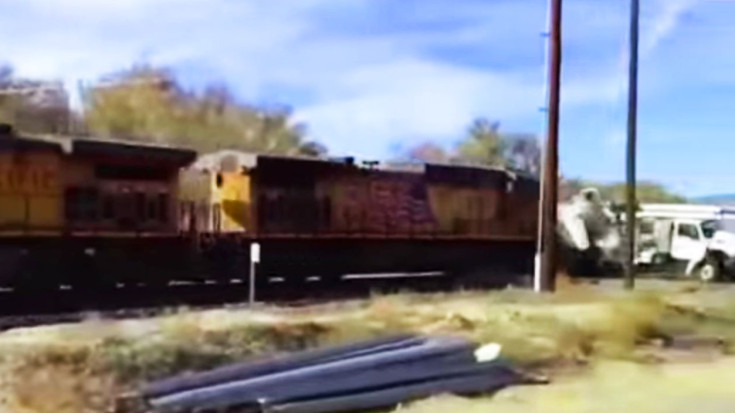 James Wood (not to be confused with actor James Woods) was near the tracks when he saw the perfect opportunity to surprise his railfan son with some footage of a passing by Union Pacific freight train. All seemed well, however, when James panned the shot in order to get the train in its full glory, he was absolutely shocked by what he saw next!

“It was surreal, I mean it was like, like a scene out of a movie almost” – James Wood

At the beginning of the recorded clip, you’ll notice a semi-truck owned by a nearby water treatment plant approaching the railroad crossing. The driver apparently was unaware of the train coming to pass, unable to hear the horn blowing, nor see the railroad crossing sign flare on and off.

It was at that moment when James turned his camera, that he captured the UP freight engine plow through the semi, crushing as well as rolling the trailer several times before it came to complete stop. This caused the truck itself to spin almost a full 90 degrees! With some amazing luck and to James complete and utter surprise, both the driver and passenger of the truck survived!

James told the truck driver that he was the luckiest man alive, and we have to sincerely agree!

How do you think the driver missed all the warning signs? We’d love to hear your opinion!