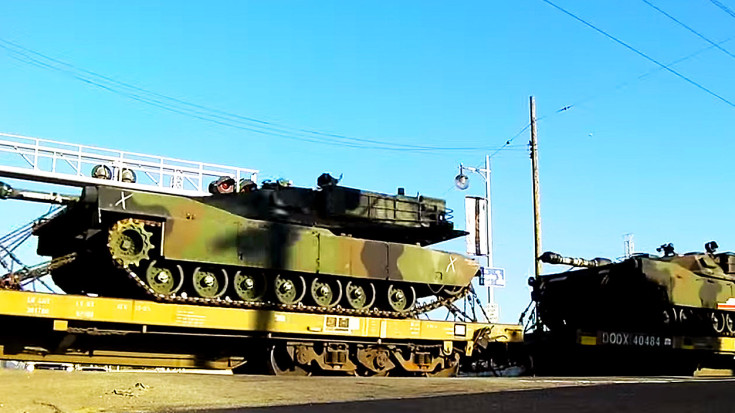 Union Pacific 4768 is seen here leaving downtown Los Angeles heading east with a very heavy cargo of M1 Abrams tanks. UP 4768 is using all of her 3000 HP engines in addition to her 419,000 LBS of operating weight to pull this load! She is most likely heading to Fort Irwin training center located in the Mohave Desert. The training center is used by both the U.S. Army and U.S. Marines.

Known as the “Cadillac” of tanks, the M1 Abrams travel distances of up to 265 miles!

Notice when the video starts out that the train is stationary and you cannot see the train loaded with tanks even thought it is right in front of you!

At a maximum speed of 42 MPH with a 120mm cannon and other heavy machine guns, she is a beast!

The M1 Abrams has served all over the world including the first Gulf War, Bosnia, Afghanistan, and Iraq. There were roughly 8,800 produced, of which it seems this train is hauling all of them!

Have you seen any strange hauls like this one? Let us know, we’d love to hear about it!