Uh Oh, Not Another Crossing Accident 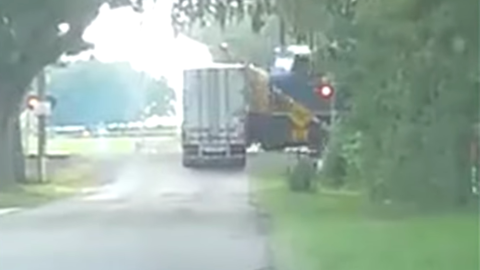 A father and his 15 year old son were returning home from a shopping trip when they just happened upon the crossing just before impact of the freight into the trailer portion of a semi truck filled with watermelons.

His son gives an “excited” narrative of what’s about to happen and sure nuf, it did!

Both father and son got out to survey the damages and confirmed that the truck driver was OK and had gotten out of the cab prior to impact.

What is amazing is that the freight train was pulling 130 cars and able to stop in such a short distance after the collision.

Residents of the nearby retirement community The Villages in Central Florida got a surprise when they heard this freight train try to stop before smashing into yet another semi truck caught on the tracks.

Let us know what you think they could have done with all of those left over watermelons!