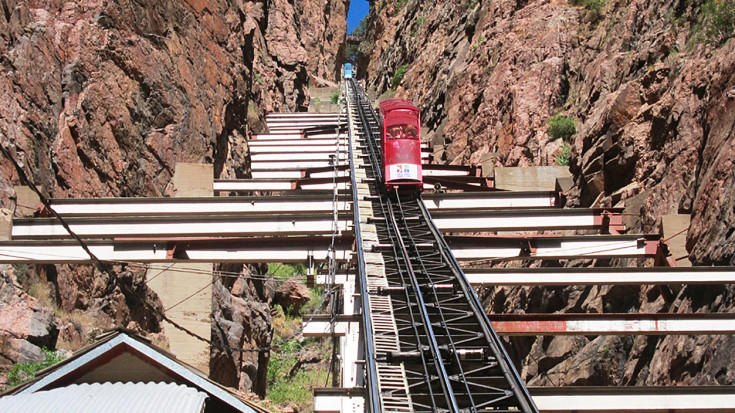 The Royal Gorge Incline Railway, nestled right next to the Arkansas River which flows through the Royal Gorge canyon currently holds the record as the steepest funicular railway in all of North America!

Funicular- a cable railway in which a cable attached to a pair of tram-like vehicles on rails moves them up and down a steep slope, with the ascending/descending vehicles counterbalancing eachother!

The railway, part of the the Royal Gorge Park (which also houses the Royal Gorge Bridge) was built at a 45 degree angle, which creates feelings of suspense and excitement whilst traveling down the track! Built in 1931 the funicular tracks incline is roughly 1550 feet in length and is only 50 feet at its widest!

If you’re not fond of heights be prepared for quite the ride!

At roughly 3 miles per hour it takes around 5 1/2 minutes to traverse the incline, long enough to feel like an eternity for those with a height phobia!

Have you had the opportunity to ride this railway out in Colorado? We’d love to hear about it!