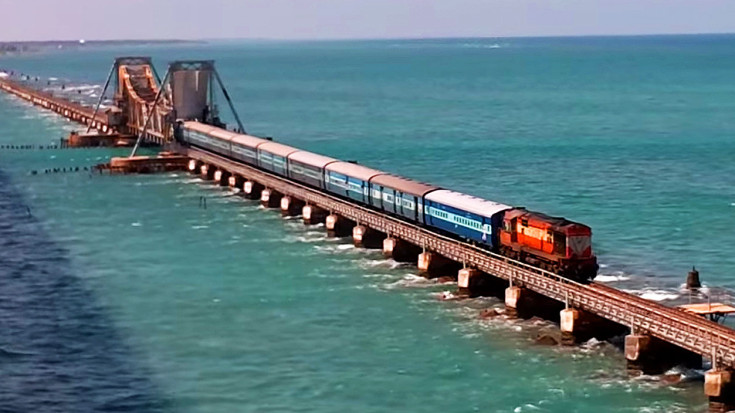 Lower your speakers on this one, the wind is very loud!

Rated one of the most dangerous rail-bridges in the world, The Pamban Bridge is a cantilever bridge (a bridge that projects horizontally into space, supported on only one end) that connects mainland India to the town of Rameswaram (named after the Hindu deity Rama). The bridge recently celebrated its 100 year anniversary, being built in 1915.

Up until the construction of this bridge, passage across the Palk Strait was achieved by boat!

Ernakulam South’s ‘Cheetah’ WDM3A Locomotive #18555 carefully traverses this bridge with a set speed limit of 15 kph (9 mph) as this is not a bridge you want to mess around on. Built in one of the worlds most corrosive environment (only second to Miami, Florida), it also happens to be in a cyclone-prone high velocity wind zone!

The bridge sits on an artificial reef, constructed from around 5,500 tons of cement, 2,866 tons of steel, and around 98,000 cubic feet of crushed metal and boulders!

The bridge has seen its fair share of calamity, including a cyclone in 1964 that destroyed the bridge. However in its reconstruction an anemometer (wind meter) was installed, warning approaching trains if wind speeds exceed 55 kph (34 mph)!

#18555 does an excellent job of making sure all of its 11 cars make it across safe and sound!

Some facts on the Pamban Bridge

Let us know if you’ve ever crossed this bridge!