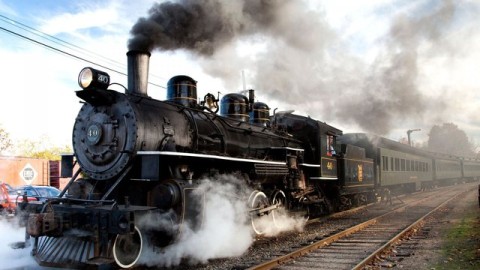 You can actually rent this locomotive and the freight cars with it!

The Queen of Steam was refurbished and now makes 90 minute excursions whereby you can actually be the engineer!

Step back in time and witness the Queen of Steam ” winding through tunnels and up 2.5% grades in the snow covered northern Nevada desert.

This clip starts with her sitting inside the machine shop building up pressure in anticipation of her next journey. Terrific photography beginning to end.

If you’ve ever taken a ride on the #40 Baldwin or a train like this let us know in the comments below! Would love to hear your experience on this classic piece of history!

War Wagon On The Donner Pass

Blizzard Conditions For UP Intermodal