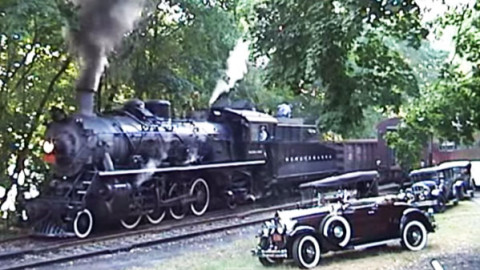 Starting with a close up of the brass whistle, the Bel-Del Railfans celebrate the occasion with vintage cars to greet the train!

Although the Belvidere and Delaware Railway line has been defunct since 1978, it served as part of the Pennsylvania Railroad system carrying coal from northeastern Pennsylvania eastwards towards the coastal areas.

Today, it serves railfans with special excursions and photo op events such as this one.

Fans line up along various portions of the tracks to see this Chinese built Mikado class 2-8-2 pass by.

The “Mikado” name originated from Japanese type locomotives that were built by Baldwin Locomotive Works for delivery to Japan’s Nippon Railway in 1897.

Mikado became synonymous with the 2-8-2 wheel arrangement from then on. It turned out to be one of the most reproduced locomotives for all of the big 3 manufacturers (American Locomotive Company, Baldwin Locomotive Works, and the Lima Locomotive Works) back in the day!

Let us know if you have seen this locomotive or have attended one of the railfan events!