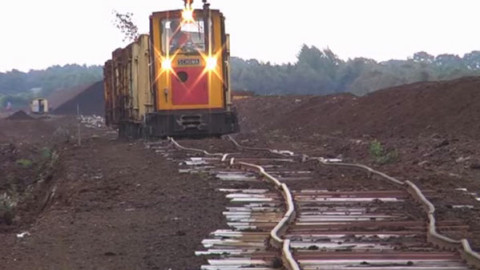 This temporary railway gives the engineer reason to pause!

Located near a German moor (peatland), this track is built on a temporary basis to haul out the peat moss found in a specific area.

Peat has been used for centuries as fuel and for agricultural purposes. Peat is an accumulation of partially decayed vegetation.

Over time, the peat moss is considered to first stage in the formulation of coal and other fossil fuels.


A Moor is defined as a tract of open, peaty, wasteland, often overgrown with heath, common in high latitudes and altitudes where drainage is poor.

The special order Schoma locomotive shown in this clip is for light railway operations and works on 900 mm track. Depending on the users order specifications, it can produce engine power of up to 200Kw and comes in a weight range of 3 to 25 tons.


Let us know if you have seen one of these specialized engines in action!