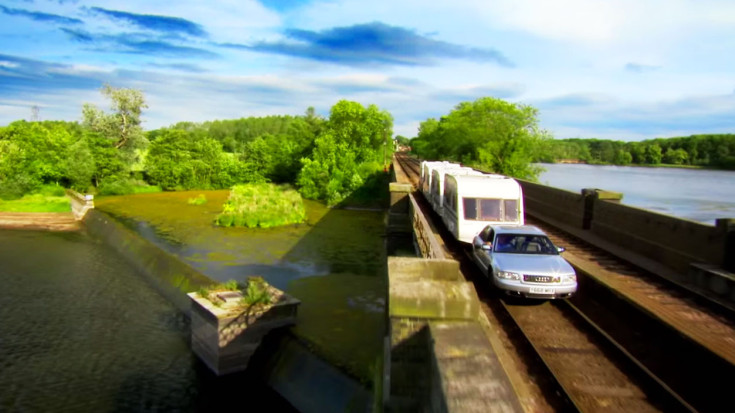 What happens when you take car guys, and throw them onto the rails? Apparently this piece of gold!

Taking the meaning of rail cars to a whole new level, the gentlemen from Top Gear (Jeremy Clarkson, Richard Hammond, and James May), attempt to ‘revolutionize’ rail travel by fitting an Audi as well as an older Jaguar with track ready wheels.

Hammond and May, trying to bring a new twist to passenger cars, hook up mobile trailers “caravans” to the Audi, and made sure not to forget the dining car!

The cars need to have 4 wheel drive as the rails are slippery!

Clarkson however, not one for the flash of passenger cars, sets out with an ultimate goal of having the fastest ‘car-train’ on the rails! With only one car attached to hold two passengers (one being the editor of Rail Express magazine) he is able to go much faster than the passenger train!

Both sets of trains are being judged by rail experts and from the looks of it, it isn’t going too well for the Top Gear crew!

Maybe let’s leave the tracks to the professionals, guys!

Has anyone here seen any oddities on their local tracks? Let us know, we’d love to hear about them!