Master Chocolatier Creates ‘Flying Scotsman’ Replica You Have To See To Believe! 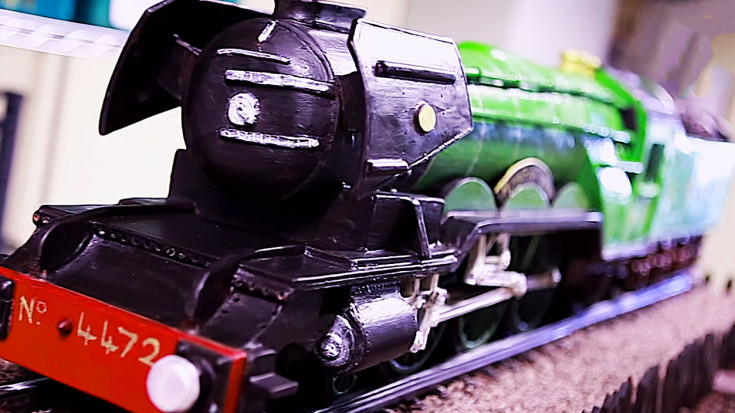 The Flying Scotsman, one of the worlds most recognized and beloved steam powered locomotives, has been given new form in a recent commission to celebrate the opening of the Borders Railway by Her Majesty The Queen, Elizabeth II!

The form in question (that may seem to be an odd choice to many) is the artistic medium of chocolate! So Morrison Construction, in association with the Scottish Borders Council, ScotRail, and Borders Railway, commissioned one of, if not the UK’s most prolific chocolatiers: Ruth Hinks!

The ‘engine’ is a 1:17 scale replica of The Flying Scotsman, the first steam locomotive to officially reach 100 mph! The Chocolate Flying Scotsman took Ruth, and her associates Martin Chiffers and Samira Kazemzadeh over 400 hours to design and create. The team utilized more than 50 different chocolate making techniques on the engine!

All in all The Chocolate Flying Scotsman boasts a staggering weight of over 165 pounds (roughly 75kg) of chocolate and has a whopping calorie count of 400,000 calories!

The Chocolate Flying Scotsman will be located at Waverley Station in Edinburgh for the official Borders Railway opening on September 9th, 2015, before being displayed on a circuit tour and eventually being auctioned to raise money for the Cash For Kids Charity!

Who’s ready to bid on this bad boy?! Would you want something like this to be part of your railfan collection? We’d love for you to let us know!