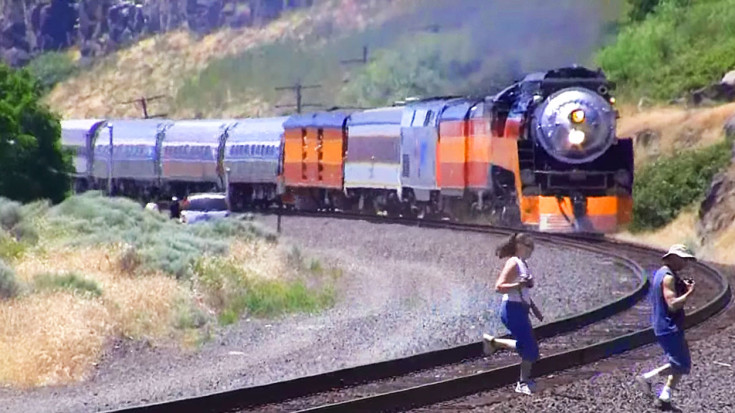 SP 4499 is stationed at the Oregon Rail heritage Center in Portland, Oregon!

These two individuals are seen, walking at what seems to be a safe distance from the tracks. This did not last very long as it seemed the two, a man and a woman, were both determined to cross the tracks!

With a combined locomotive and tender weight of 870,000 pounds, this is not a locomotive you want to see coming straight for you!

As the railroad crossing alarm began blaring, you see the couple trying to decide whether or not to cross. It is not until they hear the trains horn, and see it come charging around the corner that they decide to run across the tracks! While the two make it across, it was an incredibly stupid decision, one false step, and either (or both) of them could of fallen, causing disaster for themselves, as well as the train and its passengers!

You need to stay at least 25 feet away from the tracks and never attempt a stunt like this. It’s not worth your life.