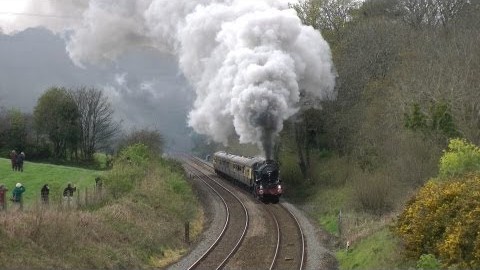 GWR 5043 roars through the English countrside in grand style!


Hearing nothing but the sound of the locomotive, the still quiet of the English countryside is shattered as she makes her way up the steeply graded Devon banks.

Pulling nine full coaches on this excursion shows the power of this GWR 4073 Class locomotive which was built in 1936. As part of the Castle Class locomotives, she sports a 4-6-0 wheel arrangement. She was restored by the Birmingham Railway Museum board of trustees and her work finally completed in 2008 by the Tyseley Locomotive Works.

She was known as Castle Class locomotive because she was originally named after Bradbury Castle, and then later renamed Earl Of Mount Edgcumbe in 1937.


One unique feature of the GWR 5043 Earl Of Mount Edgcumbe is the double chimney!

Let us know if you have seen the Earl Of Mount Edgcumbe going throught her paces! We would love to hear about it!