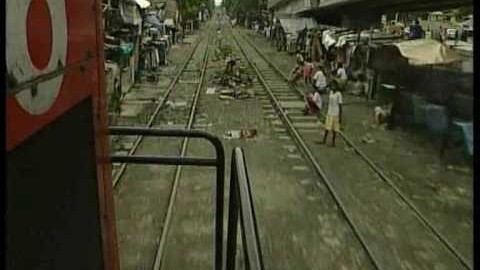 In what seems like utter chaos, this train makes its way around the rails in metro Manila in the Philippines. The amount of congestion is unbelievable as the train snakes its way through alleys and over rickety bridges and rails.

Filmed while standing on the front of the locomotive, you get a first hand glimpse of the life in the back streets and shanties that house the poorest inhabitants. They all seem quite used to the noise and horns and even taunt the engineer in some cases!

Many of the residents make homemade rail carts to make a living as cab drivers for tourists!

Using the rails when no trains are around, they cart everything from people to food and supplies.

As a result of the many floods and typhoons that have ravaged the area in recent years, the tracks are in less than mint condition. The government is actively pursuing reconstruction of various areas of track in and around Manila.

There is no way to know how many people are injured each year living so close to the tracks!

Let us know if you have ever seen this railway in action or know of someone who has. We would love to hear about it!