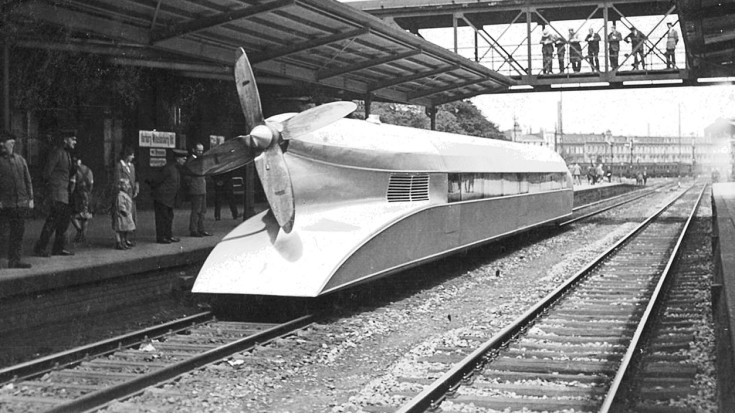 The early to mid 1900’s was a very interesting time period in locomotive design and construction. Innovation and experimentation were key factors in those early years of the twentieth century, and the rail industry did no go without its own oddball ideas.

The Schienenzeppelin is an excellent example of one of those oddball ideas!

Designed by Franz Kruckenberg in 1929, an already established aircraft engineer, the experimental railcar was designed to resemble a zeppelin airship! The car was completely powered by a large propeller located on its rear, and could achieve speeds of up to 230 Kilometers per hour (143 Mph)!

Though the car was a novel concept, it suffered many valid criticisms, leading to only one Schienenzeppelin being constructed, which was eventually demolished in 1939. Critics of the Schienenzeppelin cited the fact that it was near impossible for the car to become a functional locomotive, as the propeller made it unable to couple to other cars. The cars major fault however was its open propeller blade, which was not safe to keep operating in crowded railway stations!

It is always interesting to see what could of been on the rails of today!

What are your favorite oddball prototype engines? We’d love for you to share them with us!