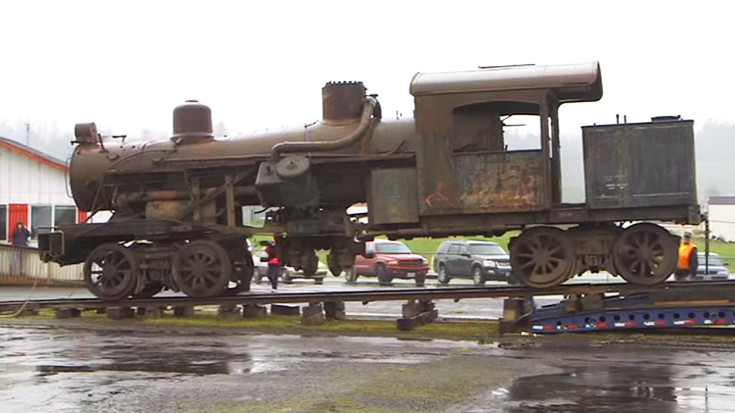 When you’re delivering a historic locomotive, its not like any other delivery you’ve chartered before.

This is not a job to take lightly, and not something you can call your local UPS guy to come pick up!

The Oregon Coast Scenic Railroad recently acquired one such engine, the historic Sunset Timber Heisler #1. This massive engine, weighing 85-tons is one of only two engines ever built at that weight! Built in 1913 she had a long and fruitful career, initially working as a lumber engine, and eventually becoming a back-up engine for diesels instead of being put straight into retirement.

The train arrived at one of the Oregon Coast Scenic Railroad’s shops in Tillamook, Oregon!

Eventually Sunset Timber #1 ended up being donated to the Pacific Locomotive Association, which the Oregon Coast Scenic railroad acquired and retrieved the engine from! As previously stated this can be a very delicate process, and a temporary unloading ramp must be constructed in order to ensure the engine is safely placed onto the tracks!

Holes must be dug under the track, to secure the train wheels, and ensure #1 does not move!

The engine is currently being worked on now and its restoration will hopefully be finished within the next few years!

Have you ever seen an old steam engine being transported or delivered? We’d love for you to tell us about it!