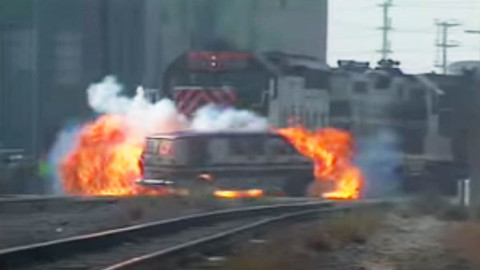 This clip includes various scenes of locomotives hitting parked cars on the tracks. It shows the power and force that these huge machines bring to bear on whatever they hit!

A loaded train going 50 MPH can take over a mile to stop and they have no way to swerve if something is on tracks in front of them!

“A moving train is a lot bigger than you think. Its size may fool you into believing it’s moving slower than it really is.

It’s also heavier than you may realize. A loaded coal train hitting your car has the same weight ratio as your car running over an empty pop can.

Trains can’t stop on a dime. I can’t change the laws of physics. It takes a mile or more to stop a train after I hit the brakes.

I can’t swerve out of the way to miss you.

Keep this note in your car. In the time it takes you to read it, I’ll be on my way, and so will you.

Believe me, I want you to live.”

Let us know if you have had a close call and if you are more careful around railroad tracks!