It Is A Close Call For This British Railfan 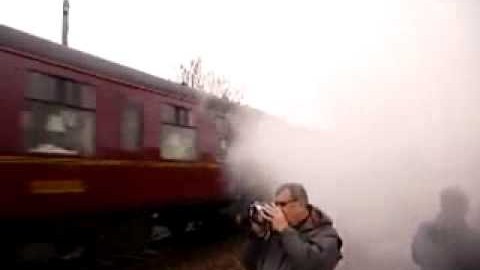 Train spotting can be dangerous if you are not aware of your surroundings!

Most Railfans are cognizant of their surroundings, but this one got lost in his photo session!

While filming what appears to be the #70013, Oliver Cromwell, this railfan forgets that he is too near the track between he and his subject.

At 24 seconds into the clip, he almost gets hit by second British Railways passenger train coming in the opposite direction, hidden by the steam from the other train.

What is really amazing is the guy filming this did not warn him that there was another train coming! Frame by frame shows that the train missed him by literally inches!

Check out the stunned look on his face after he realizes how close he came to being hit and possibly being injured and or killed. No doubt he will be more careful the next time he out filming trains!