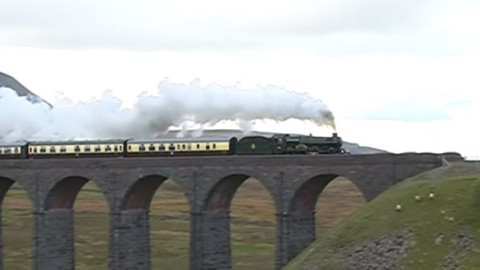 Located in Northern England, the GWR 4073 Class #5043 locomotive named the “Earl of Mount Edgcumbe” in seen crossing the 29 arch Ribblehead Viaduct in unbelievable fashion. Built in the 1870’s, the 72 mile long Settle-Carlisle line still carries a combination of passenger and freight traffic between Leeds and Carlisle.

Arch after arch goes beneath the train as the white smoke billows skyward!

The “Earl of Mount Edgcumbe” is one of one hundred and seventy one Great Western Railway (GWR) Castle Class 4073 4-6-0 locomotives built back in early 1920’s England. When built, they were considered as Britain’s most powerful express locomotives for passenger service.

Other sister locomotives in the group of 171 were named after castles in England, such as Caerphilly Castle, Windsor Castle, Pendennis Castle and Launceston Castle.

If you’ve ever taken a ride on the “Earl of Mount Edgcumbe” or a train like this let us know in the comments below! Would love to hear your experience on this classic piece of history!