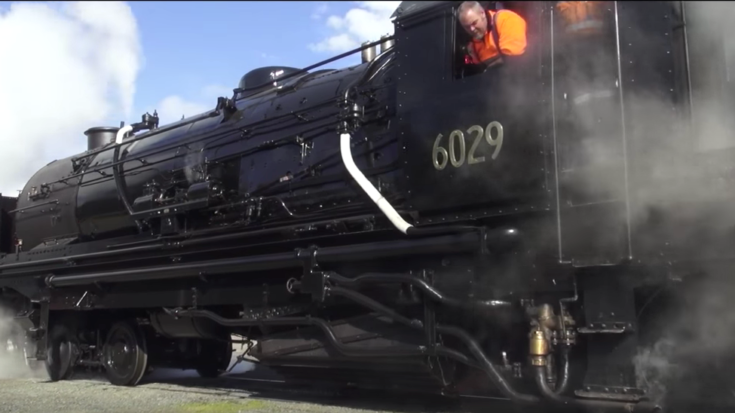 Known as a double Northern 4-8-4, the Garrett AD 60 class #6029 is an articulated locomotive with the boiler sitting in the middle of two engines front and back.

Justin Bush from ABC brings us this clip from Austography Film Image Inc, producer of the Canberra Railway Museum short film ‘All Stops to Canberra’, comes 6029 – Restoration of a Giant.

Justin quotes: “#6029 is a beast from the last days of steam, a survivor of the A.D 60 class that was once known as the largest operating fleet in the southern hemisphere. Gifted to the Australian Capital Territory, she operated for a short period in the late 1970’s until boiler rust saw her regulated to a museum exhibit for 32 years.”

“Now, Team 6029 and driver Alan Gardner have brought her back to life. This is a look at the second time the engine moved on its own, and the crews who made it happen. This is steam at its best.”

“Featuring an original soundtrack by Harry Coulson’s ‘Rain Dogs’ and The Feldons, sit back and enjoy the little film that could.”

Justin states that “we have the Thirlmere Festival of Steam occurring on March 3-4 and apparently it’s going to be running again (has been out of action due to a sale and transfer). Please let me know if you need any further details, thanks – Justin Bush – Producer, Austography Film Image Inc.”

Make sure you can attend this festival of steam locomotives!

Please let us if you attend the festival. We would love to hear about your experience!