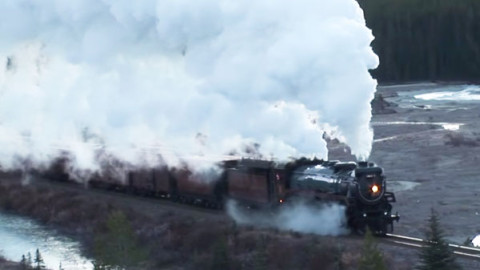 The Big Hill is a vicious grade of track that ascends 1,070 feet in the space of 10 miles to the top of the Continental Divide at a peak of 5,340 feet!

Watch in the distance as CP 2816 Empress displays her billowing white steam as she treks up the Big Hill in the Canadian Rockies!

A 78 year old locomotive that has been lovingly restored to her original condition by the Canadian Pacific Railway to celebrate it’s heritage.

With 4700 horsepower she regularly operated at 70 miles per hour!

If you’ve ever taken a ride on the CP 2816 Empress on one of her excursion runs or a train like this let us know in the comments below! Would love to hear your experience on this classic piece of history!