Sheriff Uses Shotgun To Try And Stop Run Away Train 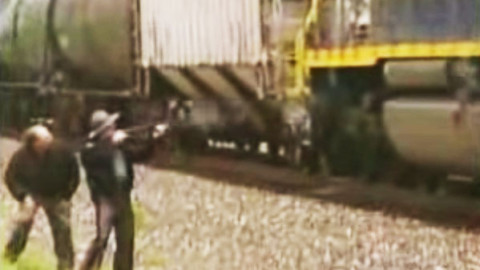 How do you stop a run away? You shoot it, of course!

This is an amazing clip of how a Ohio State Trooper tried to use his shotgun to shoot out the fuel safety shut off switch as this runaway train speeds by!

CSX 8888 (also known as the Crazy Eights) went for a joy ride unmanned when her engineer jumped out of the cab to fix a misaligned switch ahead of his slow moving fright. Only one problem, he set the throttle for traction motors at 100% and the air brake lines were not connected to locomotive. Thus, they were not functional and the 3000 horse power locomotive was on its way!

The engineer attempted to reboard the accelerating locomotive and was dragged about 80 feet before letting go.

The whole episode turned out to be the inspiration for the movie “Unstoppable” as the 47 car freight train left the yard and began a two hour journey from just south of Toledo, Ohio, at speeds up to 51 MPH! Her locomotive was a EMD SD40-2 and weighs in at 398,000 LBS.

After several attempts, she was finally boarded from the rear by a chase locomotive that was able to couple onto the fast moving freight and one of the engineers on that train managed to get to the unmanned cab of the Crazy Eights!

The train was stopped just southeast of Kenton, Ohio, after a 66 mile joy ride!

If you were around and able to witness this event back in May of 2001, please let us know your comments!