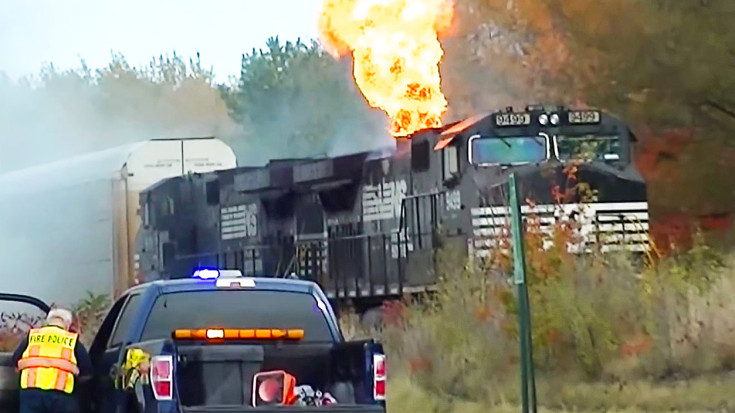 When a fire breaks out in a locomotive, the cause can be electric, oil, or fuel related.
In the case of Norfolk Southern’s #9499, a GE C40-9W, the fire is being fed by consuming its own lubricating oil from the sump. It keeps burning and the engine keeps running (like a runaway) until it is all gone. At this point, the real danger is blowing a piston or rod which would be catastrophic!

You have to consider that average locomotive is 230 tons and produces up to 6000 horse power. The engine turns an electrical generator or alternator that provides power to the traction motors. Locomotives are considered miniature electrical substations that can produce up to 600 volts (DC) or 30,000 volts (AC).

Locomotives are considered rolling hazmat’s to firefighters. With a fuel tank capacity of 5,500 gallons of diesel fuel, 410 gallons of lubrication oil, and 380 gallons of cooling water!

All of this sitting next to or underneath the electrical panels at the rear of the cab. The cabinets contain the breaker panels for the locomotives electrical system.

The bottom line, putting out a locomotive fire is a very delicate process for firefighters!

They need to determine the source of the fire as well as the type of treatment needed so that the conflagration doesn’t spiral out of control.

Ever witnessed an engine fire first hand? We’d love for you to tell us about it!