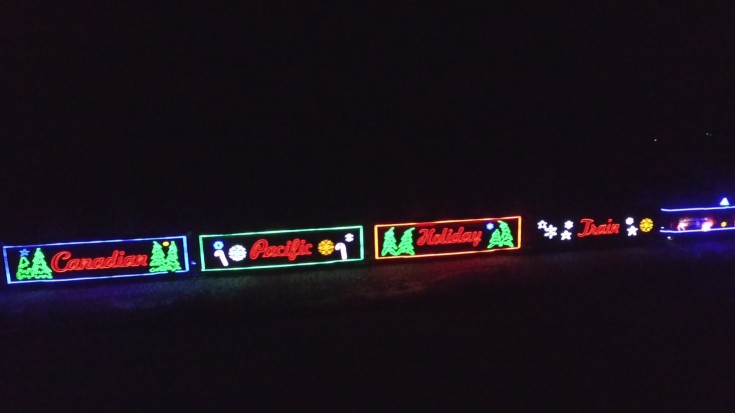 Santa’s sleigh ride view of the Canadian Pacific Holiday Train as seen from above!


Gather up the kids and get to trackside early if you want to the most fantastic display of lights you have ever seen!

<As a fantastic good will measure, the Canadian Pacific Railroad runs this train every year making 150 stops in Canada and the United States raising food and cash donations for local food banks. Starting in 1999, the Holiday Train has raised $9.5 Million Dollars in cash donations and 3.3 million pounds of food!


The Holiday Train also comes with entertainment! The train rolls into a station or stops track side and the box car with the two Christmas trees on either side drops a stage platform. Various country bands are on board to entertain crowds that attend. People are encouraged to donate gifts and food at every stop to help the local charities along the way.

All donations stay within the community. As a really terrific goodwill gesture, Canadian Pacific makes donations as well in addition to providing the entertainment!

If you have ever seen the Canadian Pacific Holiday Train, let us know in the comments below! Would love to hear about your experience!