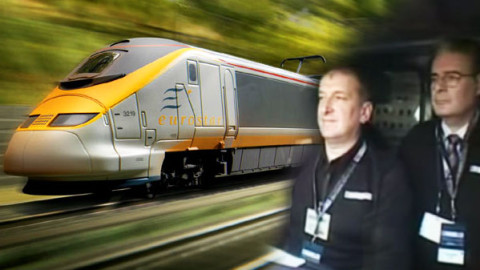 The current land speed record of 320 MPH for conventional wheeled trains was broken by the SNCF French National Railway in a test of their high speed rail system. They wanted to push the envelope of their track system to identify potential defects.

Every single detail of the test run area was checked before the run. The French call this high speed train the TGV (Train a Grande Vitesse, which is French for high speed train. ) In this test, they used a specially modified version of the British Rail Class 373 Eurostar.

This is the same locomotive used for Franceâs high speed train network that interconnects throughout Europe , including the Cross-channel Super Train from Paris to London and back. The SNCF operates about 450 trains a day over their European network.

The Cross-Channel Super Train travels at speeds of up to 186 MPH via the channel tunnel and can get you from Paris to London by way of Brussels in just over 2 hours!


The Eurostar actually passes under the English Channel!

If youâve ever taken a ride on the Eurostar or a train like this let us know in the comments below! Would love to hear your experience!