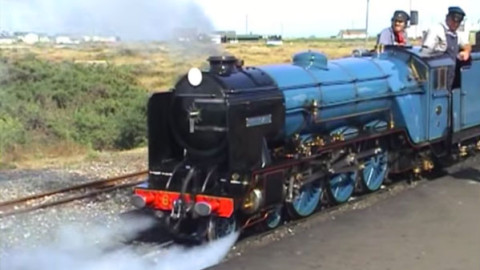 What looks like a live steamer hobby is actually a real railroad in the UK!


The 15″ Gauge Romney, Hythe & Dymchurch Railway dates back to 1927 and was originally built as a light railway. Originating in Kent, England, the line runs 13 1/2 miles from Hythe to Dungeness. This line carries more than 100,000 passengers per year!

Both steam locomotives seen in this clip were built by Davey Paxman & Company and designed by Henry Greenly. Both follow the Pacific type locomotives being 4-6-2 in wheel arrangement.

Locomotive No.8 Hurricane and No. 2 Northern Chief weigh 8 tons each!

You can even charter your own private train with enough cars to carry 120 guests for around $1500.00 US!

If you’ve ever taken a ride on the Romney, Hythe & Dymchurch Railway or a train like this let us know in the comments below! Would love to hear your experience!