“Unstoppable Train” On The Stanton Curve! 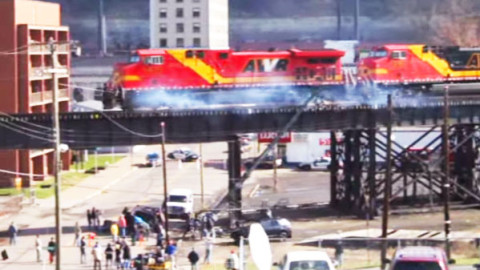 This is a great clip of the filming of a scene in the 2010 movie “Unstoppable” when the runaway train is going over the elevated Stanton Curve in Bellaire, Ohio. Known as the B & O Bellaire Viaduct, the bridge was built as a long-span with wrought-iron-trusses resting on six cut stone piers sunk into the river bed.

There are insane scenes of helicopters used in the film dodging each other while filming as the train comes around the curve.

Inspired by the real CSX 8888 (know as crazy 8’s) runaway train incident, the original runaway train traveled over 66 miles before being stopped!


Note: at 1:15 into the clip, see if you can spot the stuntman jump from one tank car to another!

The original CSX 8888 was finally stopped by a chase engine that was able to hook up from behind and applied dynamic braking action to slow the train down to 11 mph so that another waiting engineer could jump on and stop the train.

Notice the charges going off to make the train look like it is scrapping the side of the track ready to derail!

Let us know if you saw the movie and what you thought of the action scenes. Realistic or not? We would love to hear your comments!