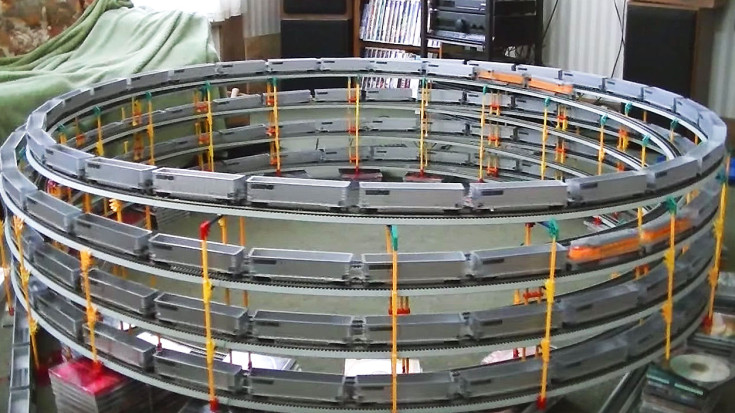 Youtuber and model train fan James Risner once again stuns us all with a very amazing h/o scale model ‘railroad’! Taking his spiral idea to the next level, Risner once again sets up a new masterpiece using what appears to be K’nex pieces as well as his tried and true Bachmann ez-track, creating a Quadruple Double Helix track!

While over 30 years old, these little engines have stood the test of time and still take on the heavy lifting!

The four tiered track has an inner circle and an outer circle, adding up to 8 levels of track for the train to run its course on. The outside track climbs up whilst the inner track leads back down to the base level, resulting in cars and engines passing each other in their respective upward and downward directions, all while being part of the same train!

Though there are less cars than the spiral the complexity is much greater and would require more planning!

Once again Risner used his Bachmann EMD Union Pacific GP 18’s for this task, this time however only using 6 engines to pull 153 cars instead of the 8 engine, 218 car set up used for his spiral! As far as configurations go, instead of one engine tied to a string of cars Risner decided on lining up his cars two engines at a time, setting up, if you will, multiple double headers!

Amount Of Cars Per Engine

(Engines lashed up in twos)

If you had the time and the resources to make any model set you want, what would you build? Tell us about it!