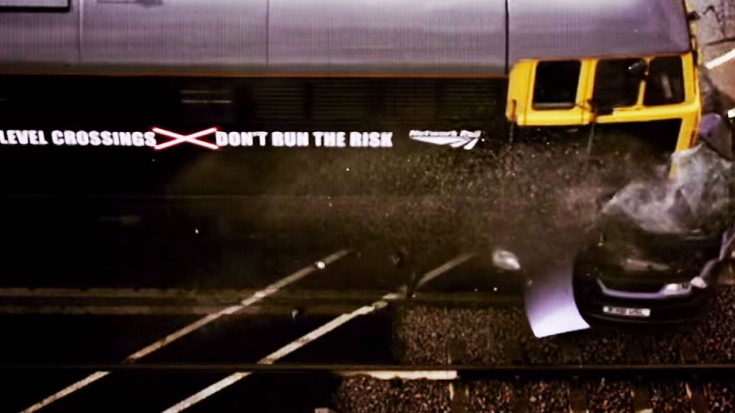 If cars and rails are involved, you can be certain a driver will cross them when a train is near!

The folks at Top Gear and Network Rail recognize this issue, and wanted to take it head on, attemtping to help others realize that no matter what, it just isn’t worth it to try and beat the train. So, they partnered up to create an in-episode safety video to let everyone know that your life is worth more than the minute or two you might save by attempting to beat the train!

However it wouldn’t be in Top Gear fashion if they didn’t try and keep it light hearted, while still cutting to the core of the issue. They decide to test what precisely happens to a vehicle when a train traveling at normal operating speeds strikes, even when that vehicle happens to have a five star safety rating!

After hitting the van, it took the train roughly 500 yards to stop!

Ultimately the vehicle, a Renault Espace (minivan), was no match for the train and was utterly smashed by it, almost being completely flattened!

The train was traveling roughly 70-80 mph when it struck the minivan!

Many safety videos are boring and dull, and due to this, are often unable to reach their core audience on the severity of the issue. It seems that Top Gear and Network Rail have done a fantastic job of making it very clear that when trains and cars go head to head, trains always win. Most importantly they did it in a way that people will pay attention to!

Do you think utilizing humor is a good way to reach a broader audience and tackle this issue? We’d love your opinions, or suggestions on how it could be done better!