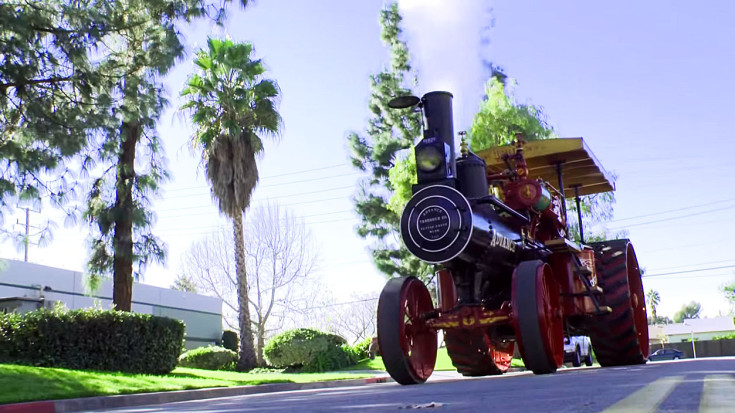 Not your everyday street car!

Jay Leno, former ‘Tonight Show’ host, and well known auto enthusiast has quite the impressive collection of rare old vehicles. One thing not many people know about him however, (unless of course they subscribe to his youtube series Jay Leno’s garage), is Leno is a huge steam enthusiast, just like us railfans!

While Leno doesn’t have any steam locomotives in his garage, he does have something almost just as good. An Advance Thresher Company Steam Traction Engine. Built in 1906 this 13 ton bad ass steamer could haul, plow, and even power a sawmill. Steamers like these helped build America, on and off the rails!

The Advance company was founded in 1881!

This engine has stood the test of time, currently just short of 110 years old, she’s seen and been kept hidden from two world wars, in order to avoid scrapping for the war effort. The engine requires two operators, one to steer and the other to operate the clutch and throttle. With only one cylinder, and an overall size of about 9 1/2 feet tall by 104 inches wide, this baby generated 16-20 horse power at roughly 320 rpms!

Originally coal or wood fired, Leno has converted the fuel source to propane, the only major change made!

When she was restored last by Leno’s friend Orman Rawlings, rubber was applied to the wheels, so the engine could be used on the street without tearing up the pavement. Since the engine weighs so much, and only generates 20 horsepower at best, the engine doesn’t lend to a high max speed, capping out at roughly 4 mph.

But with a steam engine, it’s not just about the speed, it’s often all about the sweet ride!

Have you ever operated a steam traction engine? If so we would love to hear all the details!