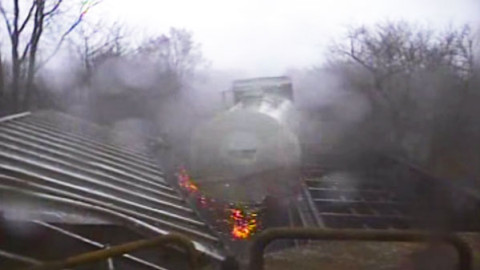 Sparks fly as this derailed tank car comes directly toward you!


A tornado is only thing that can challenge a train and win!

This is an amazing clip of a tornado lifting the box cars off the track as the train proceeds deeper into the path of tornado.

Shot from the front of the rear facing locomotive, you can actually see the car immediately behind the engine wobble and eventually fall to the side, joining 7 other cars behind it!


The train abruptly comes to a halt, while the rest of the train careens down the track directly toward the camera, led by a sparking tank car filled with Ethylene Oxide, a highly flammable and very volatile industrial chemical.

Although this was a rare event to have a tornado in early January in Illinois, it traveled across Boone and McHenry Counties and carried wind speeds of up to 110 MPH at the time of the derailment!

Fortunately, there were no injuries associated with derailment and no leaks from that tank car. Major track repairs were needed once the cars were removed in order to get the line up and running again.

If you have ever witnessed something like this whereby mother nature can play havoc with heavy items such a train, please share you comments below!