The Galloping Goose Brings Up The Rear 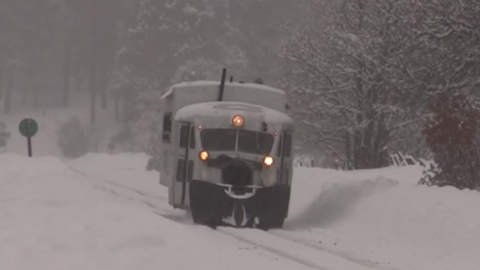 The Galloping Goose Railcar was built in the 1930’s by the Rio Grande Southern Railroad. Originally built to stave off bankruptcy of theRGSR, the Goose was developed from full sized automobiles and buses to keep their contract to deliver mail to towns in the Rocky Mountains in Colorado.

The Durango and Silverton Narrow Gauge Railroad & Museum puts on quite a show in Colorado. This Baldwin 4-6-0 Locomotive is in getting ready to take passengers over a 45 mile journey from Durango to Silverton.

SP #18 is on loan from the Eastern California Museum and is owned by Inyo County, California. SP #18 is an oil fired locomotive and is being leased by the Durango & Silverton Railroad while their coal fired #493 is being converted to oil burning.

Built between 1881 and 1882, The Durango and Silverton Narrow Gauge Railroad is the oldest continuously operating steam engine line in the United States!

SP#18 was originally built for the Nevada-California-Oregon Railway and was given the nickname “Desert Princess” for serving all of the desert areas during her career.

If you’ve ever taken a ride on the behind SP #18 in California or Colorado please let us know. Would love to hear about your experience!