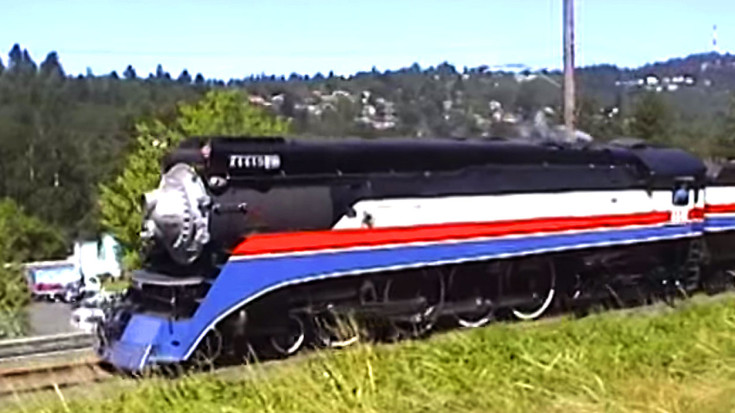 Souther Pacific #4449 has  had a long and illustrious history and is an integral locomotive to America’s proud steam history! She ran from May 30th, 1941 until she was retired from service on October 2nd, 1957. Lucky for us, her journey did not end there.

For almost 20 years, 4449 sat on display in Portland, Oregon in Oaks park. Sadly during its time on display, the engine was repeatedly vandalized and stripped of parts, including its whistle and builder’s plate. However in 1974 there was a silver lining on the horizon when the old Southern Pacific was chosen to lead the American Freedom Train!

The Alco PA-1 #1776 was the first engine to lead the first American Freedom Train!

On April 21st, wearing a custom paint scheme of patriotic Red White & Blue she emerged anew and would ride under those colors for two years, pulling a display train around most of the United States! She was theb retired once more, this time however making sure she would see no exposure to the elements.

After a series of paint jobs and excursion services in 2002, 23 years after #4449 was retired as part of the American Freedom Train, she adorned old glory’s colors once more after the events of September 11th! She kept these colors between early 2002 and the fall of 2004. This clip was taken during this time, along the newly opened Springwater Trail in Portland, Oregon, in June of 2003.

Did you get to see the 4449 American Freedom Train either time she was in service? We’d love to hear about it!