Semi Stuck On Track Is Sliced In Half By UP Freight! 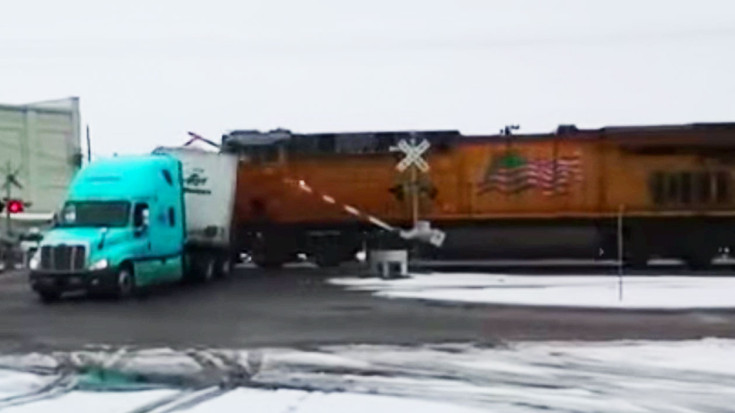 It was an incredible scene for those near the tracks at a crossing in Payette, Idaho when a semi truck was struck by a Union Pacific freight train!

The truck driver, who is lucky to have made it out with his life, was crossing the tracks at an appropriate time, when suddenly the truck’s support gear got stuck! The Payette Police and Fire departments were quick on the scene, with first responders attempting anything they could to get the truck off of the track!

Even with the use of a heavy duty lift, they were unable to get the truck off the track!

Unfortunately their attempts were futile, and emergency crews had ran out of time, as a Union Pacific freight began its approach! It seemed to be sudden doom for anything in the path of the train! The engineer tried to stop the train, but as we all know, when you’re carrying that much weight, it’s near impossible to stop when before collision!

The truck, near the Seneca Foods distribution plant, was carrying a load of canned goods, which were strewn everywhere after the accident!

Moments before the engine fiercely sliced the trucks trailer in two, the truck driver was still in the semi trying to get it off the tracks! Thankfully emergency responders were able to get the message across that he needed to get out of the truck! Luckily he did that just in time, right before we see the train come on screen and send the trucks trailer to its grave!

Have you seen any vehicles get stuck or stall on your local tracks, hopefully with a better outcome? Tell us about it!