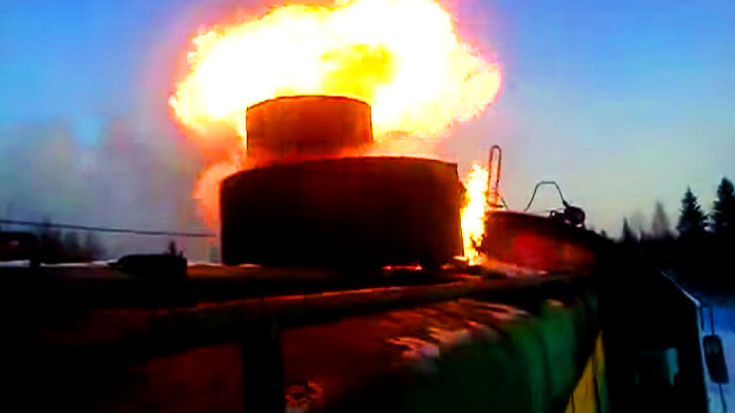 Somewhere in Crimea this locomotive was suffering from a runaway fire!

The conductor jumps out of the cab while the train is still moving to get these up close and personal shots of the smoke stack belching fire.

Most fires of this nature are the result of an accumulation of fuel in the wrong place or oil seeping into the exhaust. It could happen if the engine sat idle for too long.

Depending on the source of the flame, the engine will have to stop as seen in this video until the fire is extinguished.

Blown turbo engines are a common problem when the seals or gaskets get worn or cracked.

The seals are made of rubber that is high heat resistant. When the seals become brittle over time, they crack and allow oil from inside the turbine to leak out. This in turn takes away the lubrication on the bearings which will ultimately seize up and cause the smoke you see.

If the fire is being fed by consuming its own lubricating oil from the sump, it keeps burning and the engine keeps running (like a runaway) until it is all gone. If the engineer keeps going the real danger becomes a blowing a piston or rod which would be catastrophic!

No, this is not the same technology they used for the torch at the Olympics in Sochi in 2014!

Let us know your comments on what you thing the source of this fire is. We would love to know your thoughts!