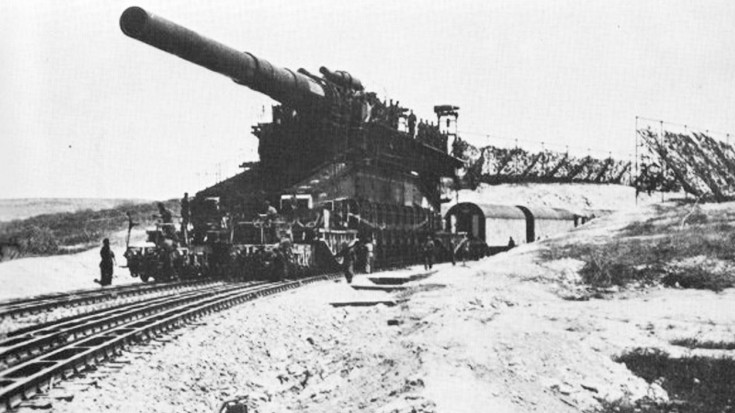 The Schwerer Gustav, was the largest-caliber rifled weapon to ever be used in combat, the heaviest mobile artillery piece ever constructed, and fired the heaviest artillery rounds known to man! Developed in the 1930’s this high calibre beast was quite the force to be reckoned with!

But why are we talking about guns, this site is still called train fanatics right? The Gustav is a very special type of weapon, what one would call a Railway (or Railroad) Gun! What exactly is a railway gun you might ask? Railway guns are large artillery pieces (often times surplus naval artillery which was then repurposed) mounted on, transported, and fired from specially designed railway cars/wagons!

Initially the railway gun was commissioned by the German Army High Command to destroy the forts of the French Maginot defense line!

So now its starting to make sense, but why should anyone care, it’s just a gun on a train, right? Supposing you were willing to deconstruct the concept of the Schwerer Gustav, you would be right, however it is so much more than that! This thing was massive, over four stories tall, and required a minimum crew of 2750 men to operate, not to mention the 2 Flak battalions whose job was to protect the railway gun from enemy air strikes!

Two of these beasts were developed at the cost of 7 million Reichsmark each though only the original Gustav was ever fired at the siege of Sevastopol!

To put this in perspective, it took 250 men 54 hours to assemble this thing, and 2500 men to lay track and dig embankments to move the railway gun from place to place! Coming in at 1490 tons this railway giant could fire shots as far as 29 miles away, every 30-45 minutes!

While throughout modern history there have been many iterations of Railway guns and armored trains, nothing has, nor ever will compare to the devastating force that was the Schwerer Gustav!

Have you had to opportunity to see any of the old armored trains and railway guns that still exist today? We’d love for you to share your experience with us!