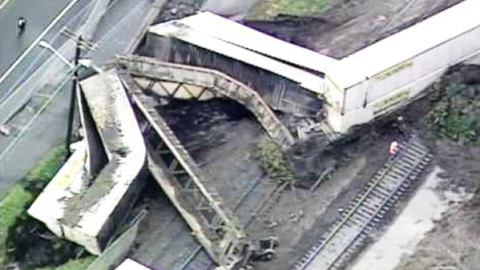 Witness John Hill saw the whole thing unfold. He was working nearby when he had a feeling something was about to happen. He went to his car to grab his camera and before he knew it, the 100 slope next to the freight train started fail!

“I saw the hill start to go. It went down and hit the first car and it tipped over, then more cars kept tipping over. It was crazy how loud it was and how slow it all happened,” he said.

There had been “activity” on the rain saturated slope earlier in the day which should have proved to be a warning. Most of the cars were carrying various types of mostly non hazardous freight and fortunately no tank cars.

The mudslide buried 20 feet of track under 10 feet of mud!

KOMO news stated that: “The cliffs along the waterfront between Mukilteo and Everett are notorious for dumping mud, rock and trees onto the Burlington Northern Santa Fe tracks below.”

BNSF has installed barriers, improved drainage and removed 13,000 tons of debris all along the waterfront line that these tracks cover and is continually doing slope restraint and repair.

Let us know if you have ever seen anything like this or the aftermath. We would love to hear about your experience!