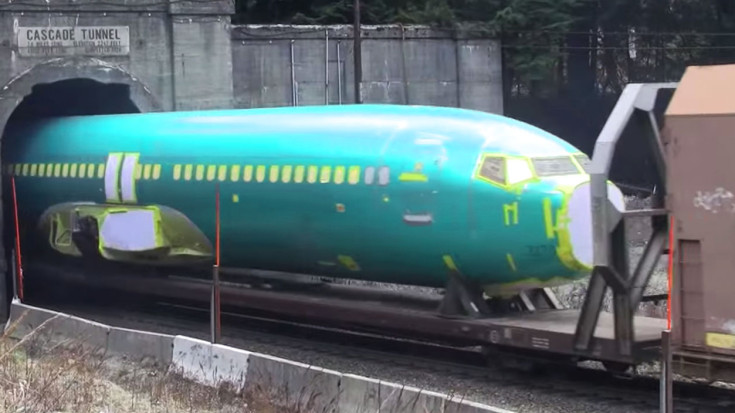 A surprise exit from the Cascade tunnel at Stevens Pass yields 4 Boeing 737 fuselages!

Note on the face of the tunnel the notches in the concrete to allow “high and wide” loads to pass through unscathed!

All high and wide loads have to get prior approval by through BNSF’s clearance department to make sure there are no issues with tight spots.

The Cascade Tunnel is 7.8 miles long and in the longest train tunnel in the United States!

Built in 1929, it is 41,183 feet long and was built by the Great Northern Railway to avoid heavy winter snows and constant switchbacks that were needed due to the steep rocky terrain in the area. The limit is 28 trains per day due to safety and ventilation factors inside the tunnel.

After a train passes through, red and white checkered painted doors close on one end to allow huge exhaust fans to clear the tunnel of toxic fumes before the next train may enter. This process takes about 2o-30 minutes each time.

This consist includes Boeing fuselages being hauled by BNSF through the Stevens Pass area of Washington State, 65 miles east of Everette.

Let us know if you have ever seen one of these Boeing trains passing by! We would like to know the record the amount of fuselages being hauled at one time!