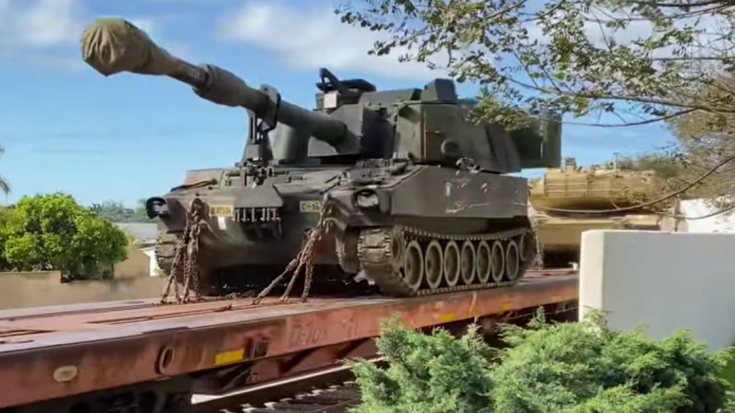 The VCRR is seen here headed to Oxnard, California to deliver a mixed cargo of 46 M1Abrams tanks along with a assorted number of M109 Palidin self propelled 155mm howitzer guns.

The M1 Abrams tank weighs 60 tons and cost an average of $6.21 million dollars each to produce. Known as the “Cadillac” of tanks, the M1 Abrams travel distances of up to 265 miles!

At a maximum speed of 42 MPH with a 120mm cannon and other heavy machine guns, the M1 Abrams tank is a beast!

The M1 Abrams tank has served all over the world including the first Gulf War, Bosnia, Afghanistan, and Iraq. There were roughly 8,800 produced.
Seeing tanks and weapons being transported by train is not all that uncommon. Military hardware is constantly being repositioned between rebuilding facilities as well as bases for training purposes. One of the most popular training facilities is located in the Southern California desert at Fort Irwin.

Let us know if you have ever witnessed a military train. We would love to hear about your experience!