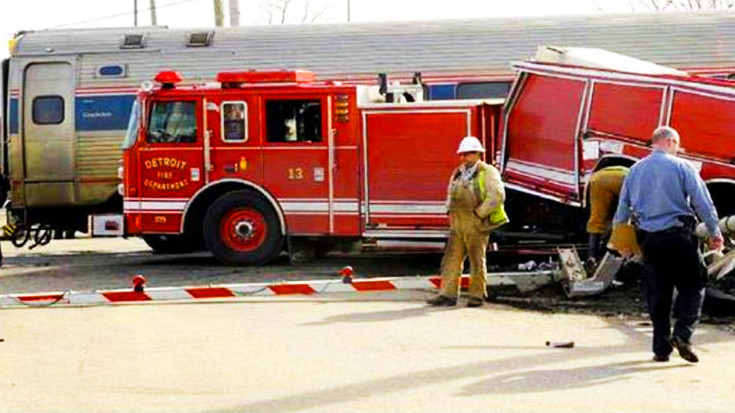 File under the “what were they thinking?” department!

The fireman responsible for leaving his Detroit hook and ladder truck partially exposed over the railroad tracks tried to move the fire truck at the last minute!

There wasn’t much left of the $600,000 fire truck after being left dangling over the railroad track while the first responders were at the scene helping victims of an earlier crash near involving a car and a semi truck.

The Chicago-bound Amtrak train came barreling around the curve carrying 76 passengers when the the engineer spotted the police car and the firetruck on the tracks. The police car punched it and backed up just in time, but the tail end of the hook and ladder fire truck was not so lucky. There were only minor injuries as a result of the collision, mostly head and back pain by some the Amtrak passengers and minor cuts on one of the firemen.

One witness said, “the fire truck just flew up into the air!”.

According the the Federal Railway Administration, it can take a train up to one mile to stop! This firetruck had no chance once left on the track.As is always the case, every video you see usually shows someone standing by the tracks waving their arms trying to get the engineer to stop in time. It never works!

Let us know if you think the fireman driving the hook and ladder truck was totally at fault. We would love to hear your comments!