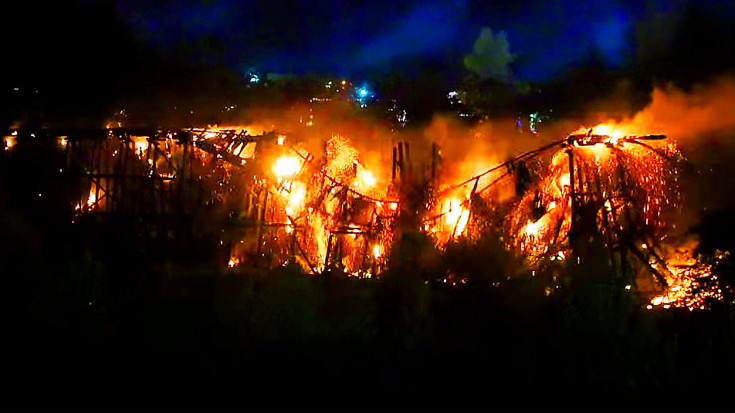 The Portland & Western Railroad Trestle in Sherwood, Oregon has suffered its own tragedy, as a brush fire struck it late last evening, the 10th of August. The fire spread quickly due to strong winds in the area.

According to the official report the brush fire started around 4:30 pm on Monday!

When the fire reached the trestle, the 85 year old structure did not have a chance, and despite fire fighters best efforts, they were unable to stop the old train bridge from being engulfed in flames! After the fire raged through the night the trestle finally gave way in the early morning, and began to collapse!

Witnesses claimed that the smoke could be seen from miles away!

Reports indicate the about two-thirds of the smoldering structure had collapsed over the night and throughout the morning. After firefighters had contained the brush fire, they saturated surrounding areas with water to ensure the flames would not spread further past the trestle.

Residents within a 2.5 mile radius of the fire were being asked to keep their windows and doors shut!

Firefighters returned on the morning of the 11th to contain the flames and let the fire run its course. Luckily no injuries have been reported, but it is always sad to see a piece of rail history go!

How do you think trestle fires such as this can be prevented? Any thoughts or opinions on how one could safeguard structures like these any better? Let us know we’d love to hear from you on this!

Another view of the trestle collapsing